What to do in Copacabana: tips and attractions

Copacabana has long been a Brazilian destination with international prominence and it is on the wish list of millions of travellers from all over the world. Find out what to do in Copacabana, a neighbourhood that has a lot to offer, in addition to its wonderful beach and its emblematic promenade! 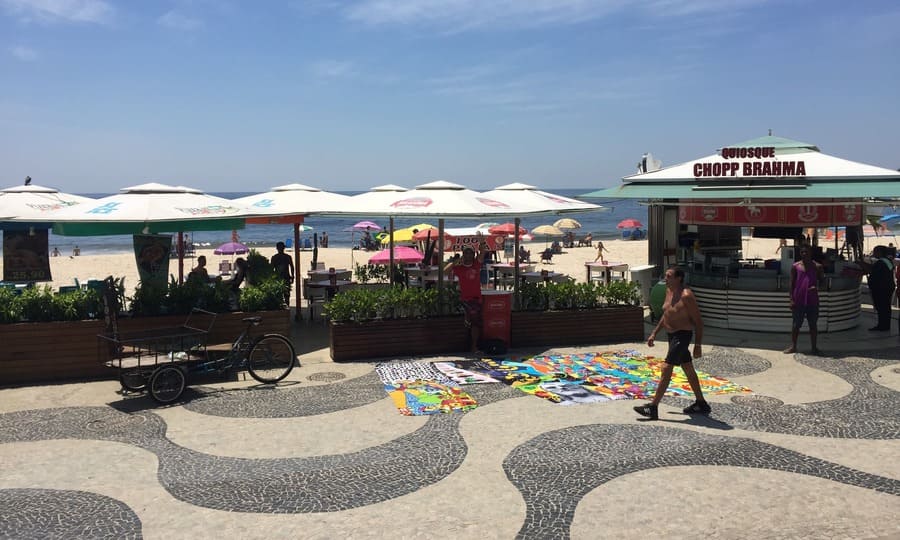 I should point out that, though I’ve been living in Rio de Janeiro for many years, I am still developing a bond with this neighbourhood, as I only recently started to visit it more regularly.

However, Copacabana is that kind of place that welcomes everybody and which allows you to develop a sense of belonging as soon as you start getting to know it better.

So, as a regular in the neighbourhood, I want to share with you a little of my fascination with Copacabana and give you the best tips to enjoy it by spending little money and having lots of fun!

What to do in Copacabana?

It is undeniable that the biggest attraction for those who visit the neighbourhood is its famous “Princesinha do Mar” (Little Princess of the Sea), as Copacabana Beach is called by its residents.

Even so, being one of the largest neighbourhoods in Rio de Janeiro, Copacabana offers many other leisure options that do not necessarily depend on the weather conditions.

Hence, the frenetic and bohemian lifestyle of the neighbourhood won’t allow you to be bored, as there will always be something new to discover or a charming corner to explore.

Having said that, don’t worry so much about the ideal month to visit, as you will find there are things to do in Copacabana all year long.

Whether you’re someone who likes to get up early to play sports or someone who buys breakfast on your way back home from a nightclub, you can bet that boredom won’t accompany you during your stay.

During the day, you will be able to choose from the many sports activities on the hot sands or in the cool waters of ​​Copacabana Beach.

And from dusk to dawn, you will be able to enjoy numerous bars, snack bars and restaurants, which are always busy.

It is true that Copacabana Beach needs no introduction whatsoever. After all, it is one of the most beautiful beaches in Brazil and one of the best known coastlines in the world!

Copacabana Beach is four kilometers long, starting at Posto1* (located in the Leme district) and ending at Copacabana Fort (Posto 6). 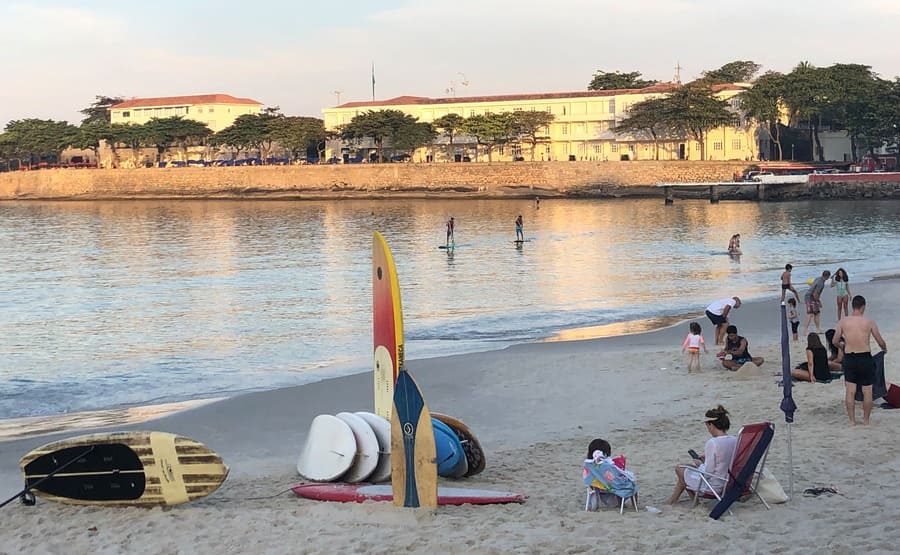 It is important to mention that officially Copacabana Beach only starts at Posto 2, but because there is no physical barrier between the sands of Copacabana and Leme, they merge and create a unique paradisiacal coastline.

Moreover, at each end of this stretch of the Carioca sands, you will find an important historic fortress.

While at the left-hand side of the beach lies the Duque de Caxias Fort, at the right-hand side, you will be astonished by the Copacabana Fort.

In addition to these great military forts, the Copacabana waterfront offers its iconic promenade, whose pavement is known in the four corners of the planet.

Built of black and white Portuguese stones, its unmistakable outline is a majestic representation of the waves of the sea. It is impossible not to fall in love with it!

*Posto is the word used for every Lifeguard Watchtower Station along the beaches of Rio de Janeiro.

What to do at Copacabana Beach?

In contrast to the beaches in Ipanema or Leblon, for example, the Copacabana strip of sand is much wider. Yet, on a hot summer day, it may be as crowded as the former ones, as its vibrant atmosphere attracts not only tourists but also its residents.

The entire promenade of Copacabana Beach is perfect for walking, jogging, or cycling. There are even stations for bike rental in various parts of the neighbourhood.

Cariocas love to exercise at the beach and some of their favorite group activities are altinha*, futevôlei** and frescobol***, among all the variations with ball games you can imagine!

Consequently, during the week, you may find some professional group classes, often run by former Olympic players. They are called “escolinhas” (small schools in free translation) and offer the fundamentals of  futevôlei and frescobol, for instance.

If you don’t fancy a group class, you can just walk along the iconic Copacabana promenade. Alternatively, you can have a draft beer at one of the kiosks alongside the coastline. 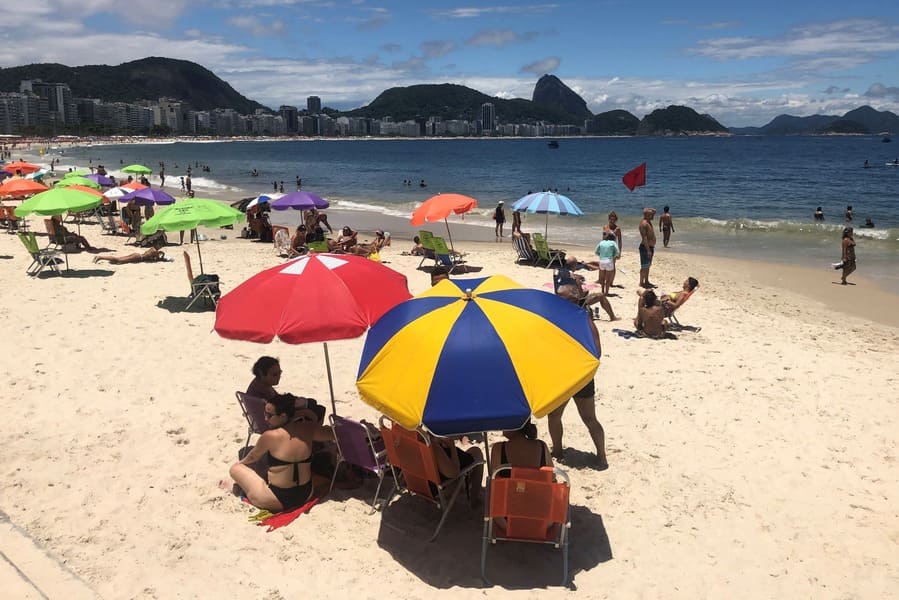 * Altinha is a circle of people playing ball without letting it fall on the sand.

**Futevôlei or footvolley is the Brazilian version of volleyball without using hands to play. Instead, players are allowed to use their feet, chest and head to touch the ball.

*** Frescobol is a tennis-like game usually played without a net and with wooden paddles.

The waters of Copacabana Beach are relatively calm. Especially when compared to the waters of the Arpoador Beach.

The sea between Posto 5 and Posto 6 is the calmest of all. It is not surprising that at the right corner of Copacabana Beach, there are stand-up paddle schools.

You don’t need to take classes if you are experienced. You can also rent the equipment and indulge yourself. 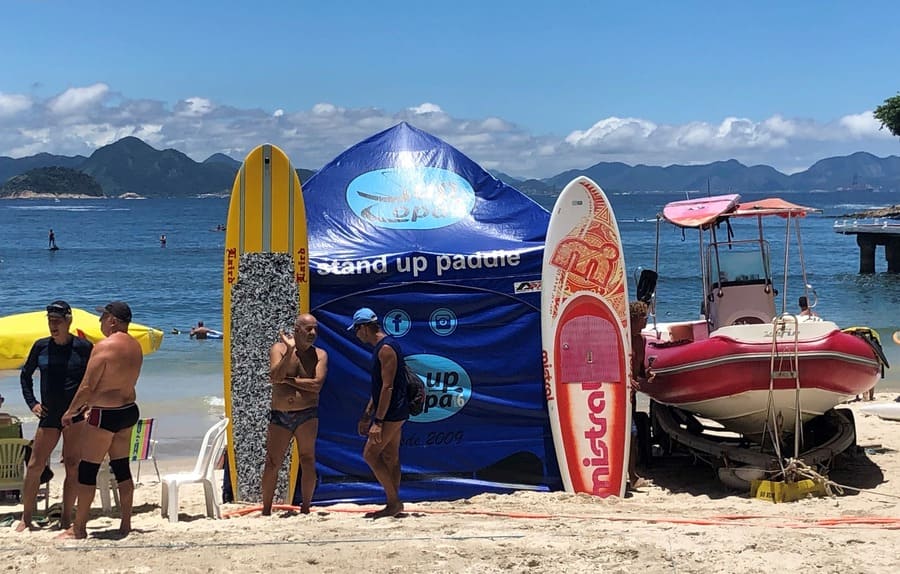 It is important to mention that Rio de Janeiro sea waters are famous for their strong currents. Having said that, and especially if you are a first-time sailor in the Marvellous City, it is essential to observe the indicative flags set along the beaches.

They are often red and, when that is the case, everyone should stay away from the sea regardless of how good their swimming skills are.

I once witnessed a really complicated rescue of bathers, which required the assistance of a helicopter from the Lifeguard Department.  And those people had even been very close to the strip of sand! So, it is important to be very careful. Especially with children.

The entire shore of Copacabana Beach is served by refurbished and standardised kiosks, with excellent infrastructure and underground cuisine.

In addition, these kiosks offer restrooms, showers and lockers that can be rented. Some also offer ATMs. 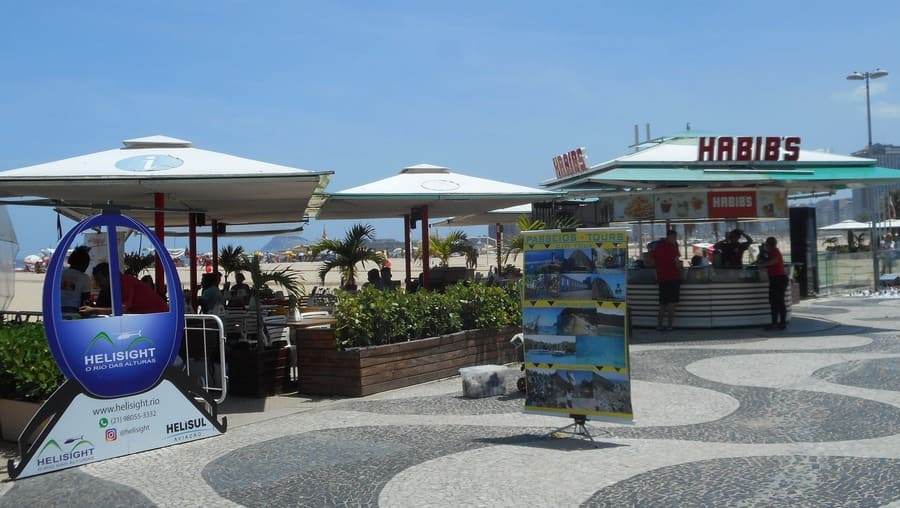 How to get to Copacabana Beach by public transportation?

Copacabana Beach can be easily accessed by public transport, as many bus lines departing from various parts of the city go through the region. However, the easiest and fastest way to access the beach is undoubtedly by subway.

Given how widely Copacabana Beach stretches, it can be accessed from the three subway stations serving the neighbourhood.

Thus, Cardeal Arcoverde Station is the closest to the left corner of the beach. It is located two blocks away from Posto 2 and it has as its best reference the famous Copacabana Palace.

Siqueira Campos Station is the most suitable for those who want to be between Posto 3 and Posto 4.

It is important to point out that this station also has an exit through Figueiredo Magalhães Street. However, do not worry: both exits are perpendicular to the beach and it is impossible to get lost.

Finally, there is Cantagalo Station which, despite being four blocks from the beach itself, it is the closest for those who want to stay between Posto 4 and Posto 5.

What to do in Copacabana besides enjoying the beach?

It is impossible to talk about what to do in Copacabana without mentioning its varied Gastronomy. You will find countless options, ranging from very simple bars to the most exquisite restaurants.

For quick meals, you will find several establishments since, practically, every street corner there will have a good alternative with affordable prices.

You will also be able to choose between big chains or the neighbourhood jewels, which have a loyal clientele!

Check out some of the most emblematic establishments in the neighbourhood:

Copacabana has a vibrant cultural life, with a wide range of theatres and important cultural spaces for the Rio scene.

Among the concert halls, Glaucio Gill and Princesa Isabel theatres stand out. As well as the Municipal Hall Baden Powell and the Theatro Net Rio.

Copacabana also has movie theatres. The Roxy Cinema, opened in 1938, is located on Nossa Senhora de Copacabana Avenue and is an iconic part of the neighbourhood.

Copacabana’s nightlife is fuelled by restaurants and bars, as well as some concert halls and nightclubs, such as those located at Beco das Garrafas.

There are numerous options of bars for nibbles and a good cold draft beer, among them the traditional Boteco Belmonte, Botequim Informal and Os Imortais (elected several times the best in Copacabana).

Nonetheless, there are many other options, without the appeal of the big names, but with delicious delicacies and cold beer.

Honestly, there are numerous alternatives for any budget and taste in Copacabana.

If you want more refined options, you can opt for a happy hour in one of the rooftop lounges of the main hotels on the waterfront, such as the Pestana Rio Atlântica Deck Bar or the JW Marriott Moon Lounge, for example.

Where to stay in Copacabana?

You will find all sorts of accommodation in Copacabana, from the most affordable options to the most sophisticated hotels.

Copacabana Palace is definitely the most elegant and renowned of all, but there is also a range of hotels and even hostels with more affordable prices. 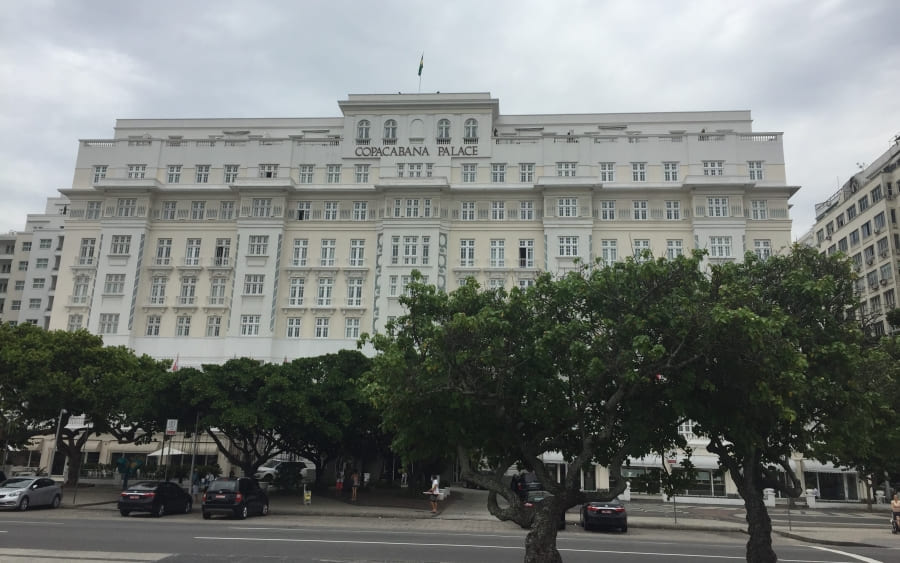 Whichever kind of accommodation you end up choosing, it is important to note that, in order to guarantee your preferred option in the neighbourhood, the wisest thing to do is to book in advance, as Copacabana is definitely one of the most popular destinations among tourists in Rio de Janeiro.

Moreover, if you plan to spend some time in Copacabana at the end of the year or in February, it is advisable to book many months in advance as it is not only high season due to the school holidays, but also because it covers the most emblematic events in Rio de Janeiro: New Year’s Eve. and Carnival.

Copacabana: real fun at any time

Inarguably, Copacabana is a vibrant neighbourhood that caters to any type of audience.

Its leisure possibilities are countless, since the neighbourhood offers easy access to other charms of Rio de Janeiro, such as Rodrigo de Freitas Lagoon and Ipanema, for example.

In short, Copacabana neighbourhood is strategically located to enjoy the Marvellous City. So, whatever your style, budget or age, you will definitely find what to do in Copacabana. Come and enjoy all the wonders that this little piece of Rio has to offer! 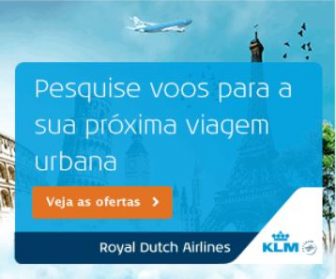 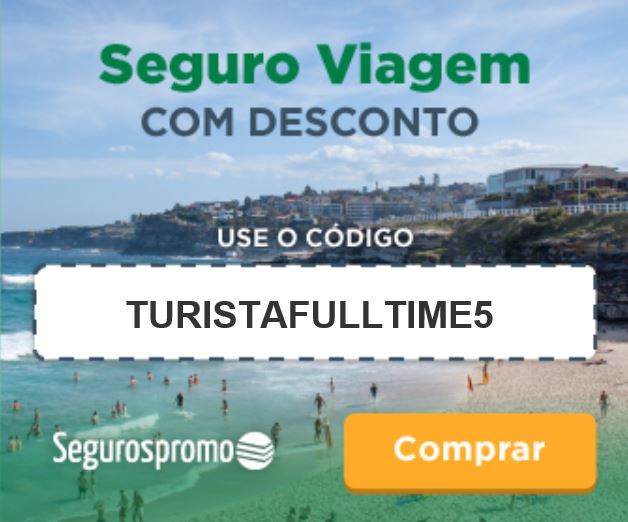 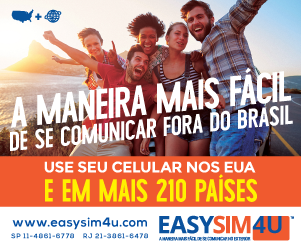 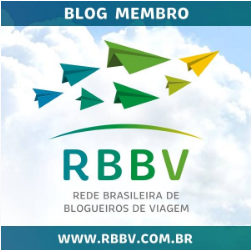 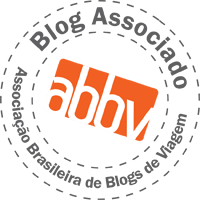 This website uses cookies to improve your experience while you navigate through the website. Out of these, the cookies that are categorized as necessary are stored on your browser as they are essential for the working of basic functionalities of the website. We also use third-party cookies that help us analyze and understand how you use this website. These cookies will be stored in your browser only with your consent. You also have the option to opt-out of these cookies. But opting out of some of these cookies may affect your browsing experience.
Necessary Sempre ativado
Necessary cookies are absolutely essential for the website to function properly. This category only includes cookies that ensures basic functionalities and security features of the website. These cookies do not store any personal information.
Non-necessary
Any cookies that may not be particularly necessary for the website to function and is used specifically to collect user personal data via analytics, ads, other embedded contents are termed as non-necessary cookies. It is mandatory to procure user consent prior to running these cookies on your website.
SALVAR E ACEITAR